Today we continued our exploration into the realm of three-dimensional art. Teal started the day off with a question and answer time on the rug. She asked for students to talk about their sculptures from the last week and explain a few problems they had as well as some success. This was designed to get the students to start helping each other out on the project, to problem solve with one another. The students really stepped up on this one; several students had problems that other students solved. For example, one student was having trouble making a ladder because they were trying to use pipe cleaners and they were not stable enough. Another student recommended using Popsicle sticks and hot glue to make it stay together. The student then proceeded to try this technique in work time and really enjoyed it.

Teal then moved the class into position to watch a slideshow she had created. In the slideshow she talked about bases, and how to make things stable. She had pictures of a few things like feet, and trees with roots. She asked the class what was special about these things and the class said that it kept the tree or the human standing up. Teal then made the connection between that and their own little project, stressing the fact that the students need to make sure that their structure is actually stable.

She also demonstrated a new technique for the class called paper pulp. We had already mixed a large batch of the pulp for students to work with so they were told to experiment with it during class. After their skeleton/armature was done they could start “finishing” techniques. Some of the students really enjoyed the paper pulp and some of them were completely disgusted by it. Below is a picture of one of the students holding up what she did with the pulp.

This student wanted to create a rough surface for her slide, but didn’t know how to do it. We recommended the paper pulp and she was thrilled with how it turned out. While experimenting with the pulp she realized that she could make is smooth if she wanted to but she could also make it very rough like she wanted originally.

Another student wanted to create animals in 3-D to put on his structure. His structure idea was a playground for animals located way up in the mountains. He came up with a brilliant way to create animals using the pipe cleaners. The class had been having a hard time really creating anything with the pipe cleaners because they were so flimsy but his animals were wonderful. Below is a picture of one of the animals he created. 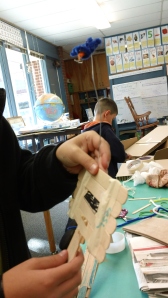 As you can see in the picture he also devised a way for the bird to fly by attaching it to a thin metal wire which he plans to hang on his structure to make it seem like the bird is flying high above.

Another student decided to work in a relief rather than full round sculpture. He had tried full round on his structure last week and decided that he wanted to do the relief instead. He really enjoys drawing especially in 3-D and the relief was a lot closer to that which I think helped him understand it more. Below is a picture of his work in progress. 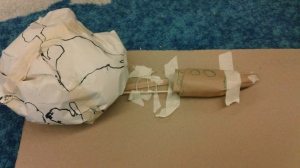 It was really cool to see him give 3-D another chance and really enjoy himself while doing it. He also learned a lot of good techniques from his peers.